skip to main | skip to sidebar

Upon looking at the Hand Spinning and Weaving Department Premium List when it became available in early June (~6/6/22) I was surprised to realize that I did not have any yarn completed since the specified date (8/1/21).  However, it does make sense given the move and focus on the large SOS Sweater.

Then, as I started to review the premium lists for other departments and thinking about where I was on projects, I realized that I might be able to field a decent entry.

So I have three photos: 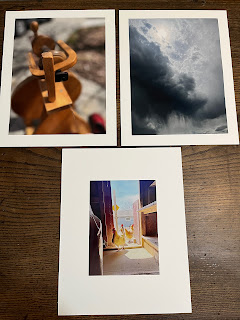 Thanks to the Tour de Fleece, Hommes and Femme, and some warmup spinning, I finished two yarn entries.... Tibetan Mastiff (Ramen) and Dorset Horn (SE2SE) to go with one Handspun+Handknit Hat. 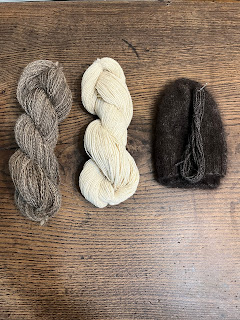 And some last minute Strawberry Jam. 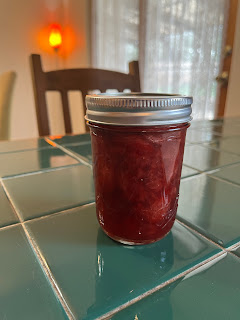 Of all of these things, only the Hat was complete between August 1, 2021 and June 6, 2022.  Everything was dropped off last week.  Judging was on Wednesday and the Fair was open Friday thru Tuesday. 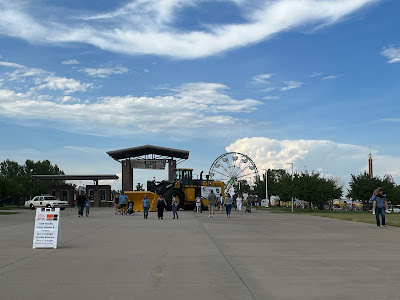 I went over the weekend to see the exhibits.  There were large entries in both the Spinning/Weaving and Needlework departments... especially Needlework was much larger than in recent years.

I'm happy to report that each of my yarns received second place and were displayed on the wall with the other beautiful yarns. 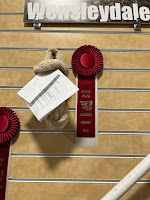 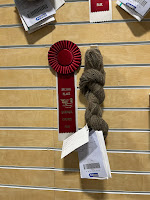 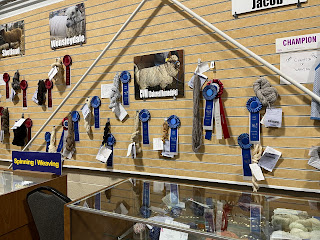 None of my other entries received ribbons, but it was quite fun to see my photos displayed with the other entries. 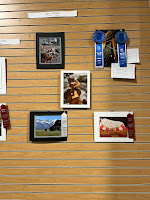 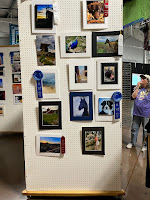 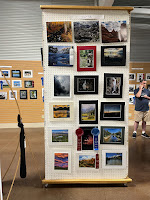 As well as my hat and jam on the shelf displays. 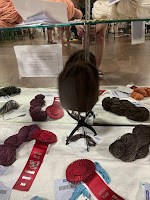 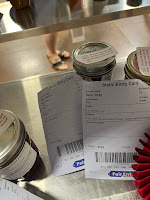 The Best in Spinning was this remarkable Handspun-Handknit Sweater.  This did not look like handspun yarn at all. 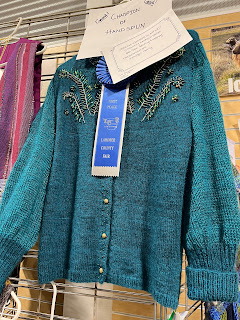 Some of the other entries.... 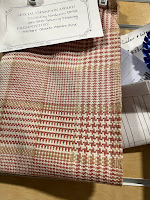 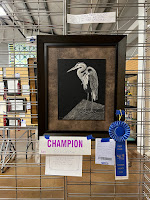 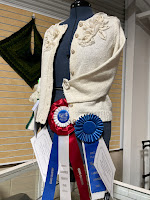 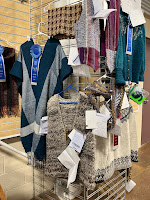 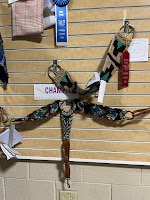 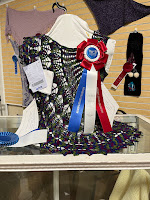 Wilma and I picked up our entries on Wednesday.  She was a very good girl while waiting in line... and very excited when we picked up the fiber projects.  :-)

For the yarn:  The majority of points lost were for not following instructions.... while I did state the intended project for the yarns, I neglected to include the intended technique... knit, crochet, weaving.  oy. 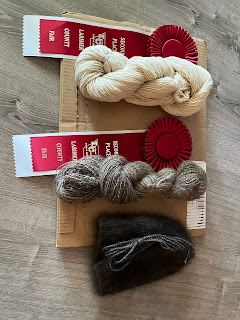 The canned goods can only come from pre-approved recipes.  This wasn't clear to me in the Premium List prior to entry.  In going back to read it again, it's still not clear to me.... Although I now have the list of approved sources, so I will take a look and then decide if I want to try again.

There were no notes on the photographs, which was disappointing.

Overall it was a good fair for me and the fibery-stitching competitions are definitely my favorite.  I have no doubt that I will continue to compete.  :-)

Kathryn Ray
My husband and I returned to Colorado in 2009 to live a simpler life. Right now the goal of simple means we are busy. Busy fixing up our farm, raising Alpacas and Tibetan Mastiffs, racing wheelchairs, building flying objects, Alpacamundo, and Colorado Tibetan Mastiffs. This blog is about these and the other things going on in my head. I hope you find it interesting, useful and inspiring.

Where to Find Me